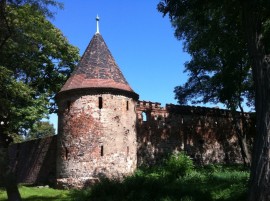 is an inconspi-cuous small town in the middle of Germany. Prehistoric discoveries imply the first colonization in the present city area around 3000 before Christ. But Zerbst enjoyed its great flowering in the 11th until the 18th century in our time - as an important residential city Zerbst became a political and cultural center of Central Germany. These times are definitely gone.

was born in this town called Zerbst/Anhalt - a long time after its glorious days, of course.

At the age of ten he got piano lessons. Quite a bit more profounded was his musical education at the Landesgymnasium für Musik in Wernigerode/Harz, where Olaf Plassa passed the German Abitur.

The study for voice

at the Hochschule für Musik "Carl Maria von Weber" in Dresden, as a student of Prof. Helga Köhler-Wellner, was finished by him with an artist's diploma. One year later he obtained his educational degree and as a result he received a teaching position for voice coaching at the Dresdner Musikhochschule for two years. 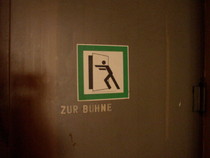 led Olaf Plassa to the Staatsoperette Dresden which entrusted him with several tasks during his study, right after the State examination. He impersonated numerous roles in operas, operettas and musicals on this stage. 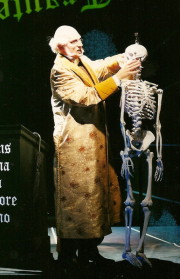 As Plumkett in 'Martha', as the Four villains in 'Les contes d'Hoffmann', as Dr. Bartolo in 'Il barbiere di Seviglia' (foto). Or as Rasputin in the world premiere of the operamusical of the same name by Volker M. Plangg. After quiting his engagement Olaf Plassa returned on stage of the Staatsoperette over and over again for many years: as Oberst Ollendorff in 'Der Bettelstudent', as Prof. Henry Higgins in 'My fair Lady' or as Baculus in 'Der Wildschütz'.

Olaf Plassa relinguished being a member of the ensemble in Rostock and is currently working as a free-lance singer.

Also in Gera he played the part of Geronte di Ravoir ('Manon Lescaut'); as well as Father ('Hänsel und Gretel') or as Escamillo ('Carmen') he was very successful. Further guest engagements led Olaf Plassa to Bremerhaven ('Jesus Christ Superstar') or to the Opera Leipzig ('Martha'). Since 2013 he is a member of the Seefestspiele Mörbisch ensemble in Austria, after being part of the ensemble of the Schlossfestspiele Schwerin ('La forza del destino', 'The magic flute', 'Der Freischütz') for many years.

as well as a concert singer he is in demand all over Europe. His journeysled him to France, Austria, Switzerland, Poland, Malta and Monaco. All great bass roles belong to his repertoire. Accordings with the german radio stations Mitteldeutscher Rundfunk and Westdeutscher Rundfunk round off Olaf Plassa's vita as an all-round artist.